Examples : Hotels, Hiking, Activity
Home / Take in the sea air with Ana
-A +A
Back to list 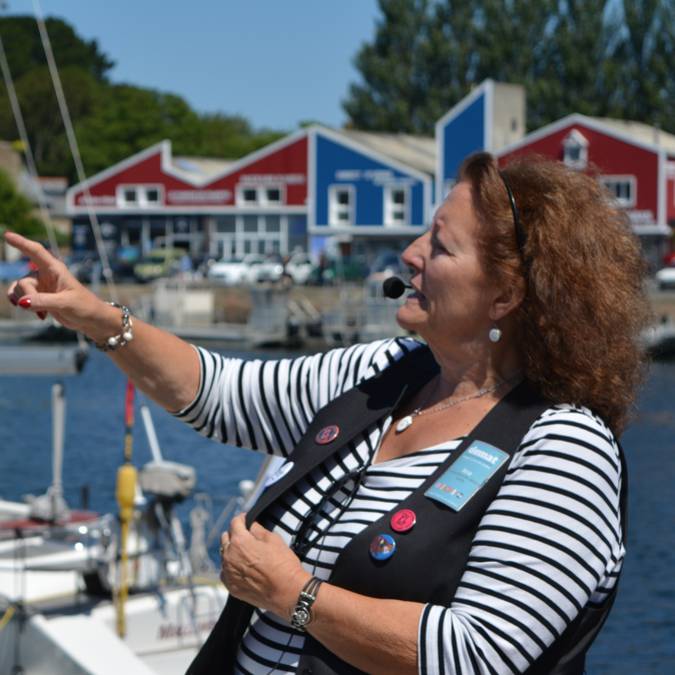 Your sparking guide to Paimpol, a town she knows like the back of her hand, Ana loves to share stories with you !

The themed exhibitions at Milmarin in Ploubazlanec will allow you to learn all about the epic seafaring voyages of the Paimpol fishing fleets.

And for the children, make sure to pick up a copy of the fun activity book to discover old Paimpol ! 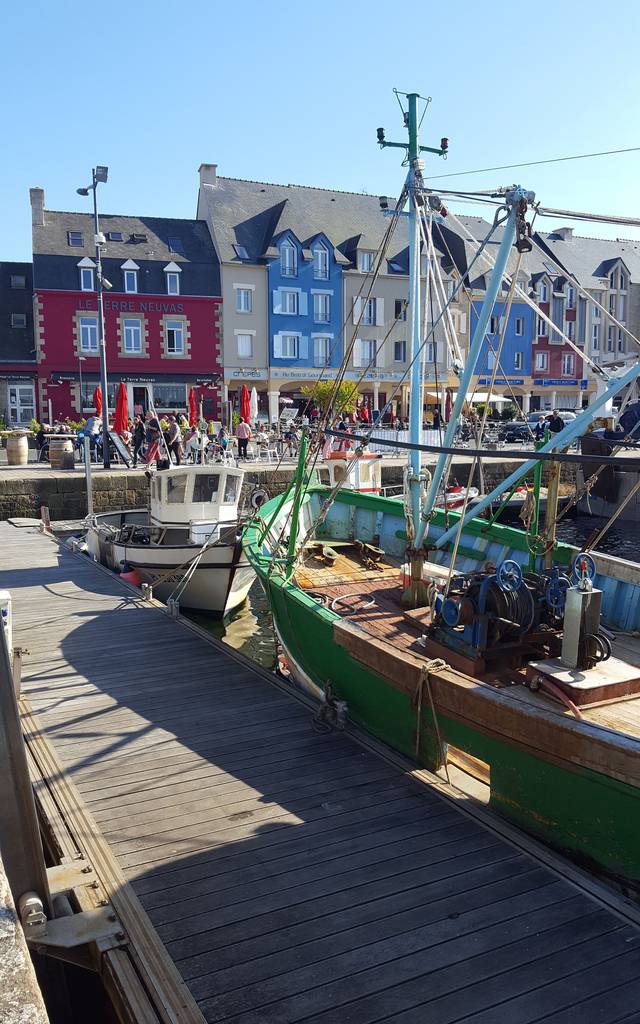 In the web of the narrow pedestrian streets, her guided visit is punctuated with charming stories, recounting the history of the port town which has looked out to the world for centuries.

On a Tuesday morning, we follow the example of the locals, and head for the busy market. As soon as we arrive, the song of the gulls attracted by the trawlers draws us to the port to see fishermen repairing their nets and pleasure-boaters busying themselves on deck... There’s no doubt that Paimpol is a seafaring town !

The market is going full-swing in the streets behind the impressive shipowners’ and corsairs’ houses on the quai Morand. A short stroll along a narrow street finds us in the historic heart of the town. Fishmongers’ stalls jostle with oyster farmers and vegetable growers, selling the famous coco de Paimpol haricot bean... There are also the colourful artists’ gallery window displays to admire. Enough to delight the eyes, nose and tastebuds !

Did you say ‘Iceland Fishermen’?

We stop to ask a local fisherman about the Iceland fishing fleet, so well-known around here. He advises us to go and see Ana at the Tourist Office because she offers a guided visit every Tuesday afternoon to tell the story of the history of Paimpol. Guided visit ? Not my thing, I say. I prefer to wander by myself, even if I don’t remember much about the visit afterwards. The fishermen insists : “ You’ll see. It’s different with Ana.  There’s no-one quite like her for telling the history of Paimpol ! ”

Ana, the smile of Paimpol

And so early afternoon finds us outside the Tourist Office, ready to set off with ten or so other visitors. Right from the beginning we’re charmed by our smiling cheerful guide. She’s obviously well-known to locals, as during our 90-minute walk people stop to greet her and say hello. As we continue our walk, Ana provides a mixture of history and anecdote. Here, a sailing ship painted on a wall, there a scallop shell carved into a door surround, above our heads a little Virgin celebrating the end of a cholera outbreak... Ana brings the stones to life, and describes the daily history of the town in a really natural manner. In fact, she does it so well that the pieces of the puzzle gradually come together to reveal the spirit of Paimpol !

I’m not going to be able to remember all the dates or names, but I was moved by the fate of the men - sometimes very young men - who set sail for Iceland to fish for cod for 6 months of the year, without setting foot on dry land. Perhaps they were ‘land-sick’ when they got home ? I glimpsed the strength and courage of their wives, looking after the household, worrying as they scanned the horizon from the Widows’ Cross at Ploubazlanec, watching for the return of the ships.

Note to self : I must re-read An Iceland Fisherman by Pierre Loti.  I’ll be able to recognise the places and the atmosphere of that time !

I admired the maison Jézéquel on the rue des Huit-Patriotes : a half-timbered house built on pillars, with enclosed porch, unique in Brittany. I smiled at the memory of the ‘Hydro’, the national school for officers of the merchant navy. Evenings in the ‘Latin Quarter’ on the rue des Islandais, dances where mothers presented their daughters in the hope of finding a marriageable cadet. The memories of this period still have the power to summon a nostalgic smile, and perhaps you’ll hear about the ‘coup du canapé’ - a little ruse to trap an unwary young man into marriage !

I’ll also remember the numerous galleries and studios in the town, the artists drawn by the quality of the light and the unique ever-changing atmosphere of the area. As Ana says, don’t hesitate to step inside, taking time to admire the ancient beams and floorboards still present in some of the interiors.

The call of the sea

And finally, the port...

In the heart of the town, this was the starting point for the great seafaring voyages of the Paimpol fishermen. Ana tells us that the port is a registered heritage site. The colourful buildings of the Quai Duguay Trouin and Kernoa remind me of Icelandic architecture, a nod to the link between Paimpol and the volcanic island. We watch the ballet of the pleasure-boats, trawlers and flat-bottomed oyster boats waiting their turn at the lock which allows passage to and from the inner harbour.

It’s here that our time with Ana ends, but the exploration hasn’t finished yet!  Ana has given us a whole list of places to visit : Beauport Abbey, the pointe de Guilben and its volcanic rocks (which we find in the architecture of the Vieille Eglise), the Widow’s Cross and the port of Pors Even at Ploubazlanec, the Temple at Lanleff...
Sitting at a café terrace enjoying a well-deserved ice cream, we’re already planning our next adventure ! 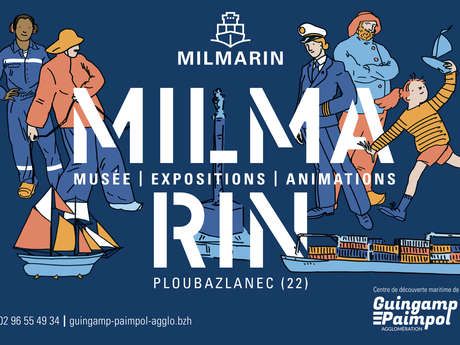 Share the lives of seafarers past, present and future. The Mémoire d’Islande museum traces the history of the great fishing voyages to Newfoundland a... 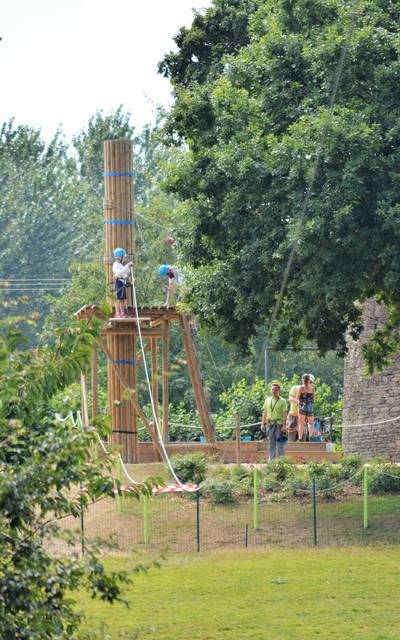 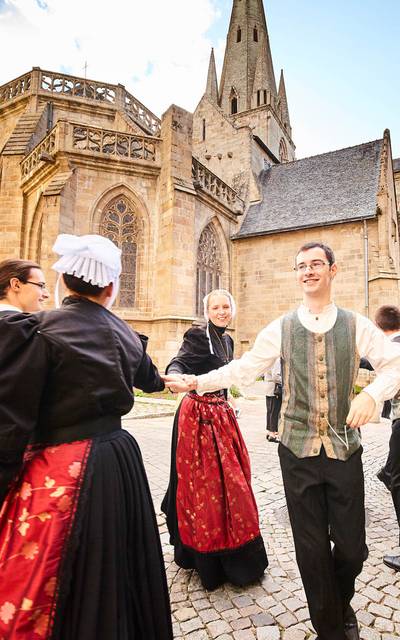 The battle of the best Breton dancers 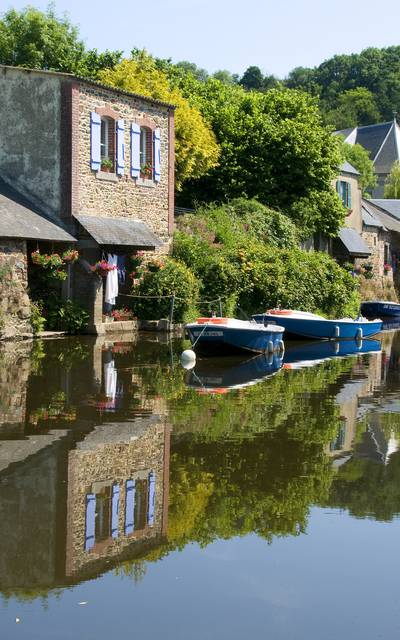 A 360°panorama from the roof of the Côtes d’Armor